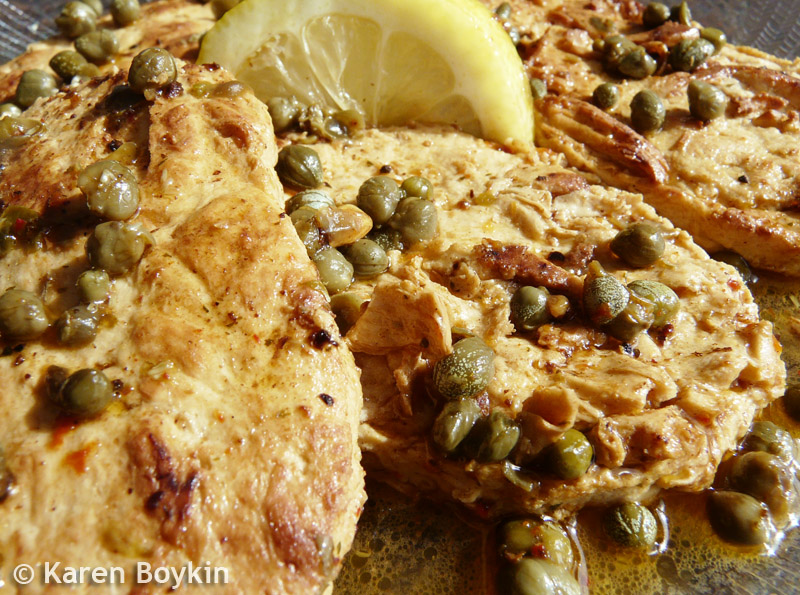 Chick'n Scallopini with capers and lemon

Did you know that there’s a whole Meatless Monday movement sweeping the nation? Neither did I. The founders of this effort say their goal is, “…to help reduce meat consumption by 15%  to improve personal health and the health of the planet.”  They had me at “improving personal health.”

There’s a company that produces a line of garden-protein based meat, called Gardein. They’re traveling around the country for a month hosting Gardein parties to convince people that going meatless can be tasty and easy. Let’s just say I was skeptical about the “tasty” part. I don’t generally care for mock meat but I figured I had nothing to lose by trying a couple of the frozen and refrigerated entrees.

First up was  the Chick’n Scallopini. I sauteed the each piece of chick’n in olive oil, 2-3 minutes per side.  Next, I poured in a half-cup or so of vegetable broth, about 2 tablespoons of capers (who measures?), and a good squeeze of lemon juice. Turn off the heat and let the chick’n rest in the juices. From what I gather, it’s easy to overcook vegetable protein so watch the heat and timing closely.

I removed one piece and cut into it with my fork. I wanted to see if the look of the garden protein matched that of a regulation chicken breast. I have to say that they did a pretty good job of replicating the shredding texture. How does it taste? Honestly, it’s a little squeaky on the teeth but once you get past that, the lightly seasoned chick’n scallopini isn’t half-bad.

Although I love my dairy, I am not a big meat eater. That’s why it’s not very likely that I’d turn to meat-free options to satisfy an already-minimal craving. Should the need arise though, it is good to know that there are products like Gardein readily available.